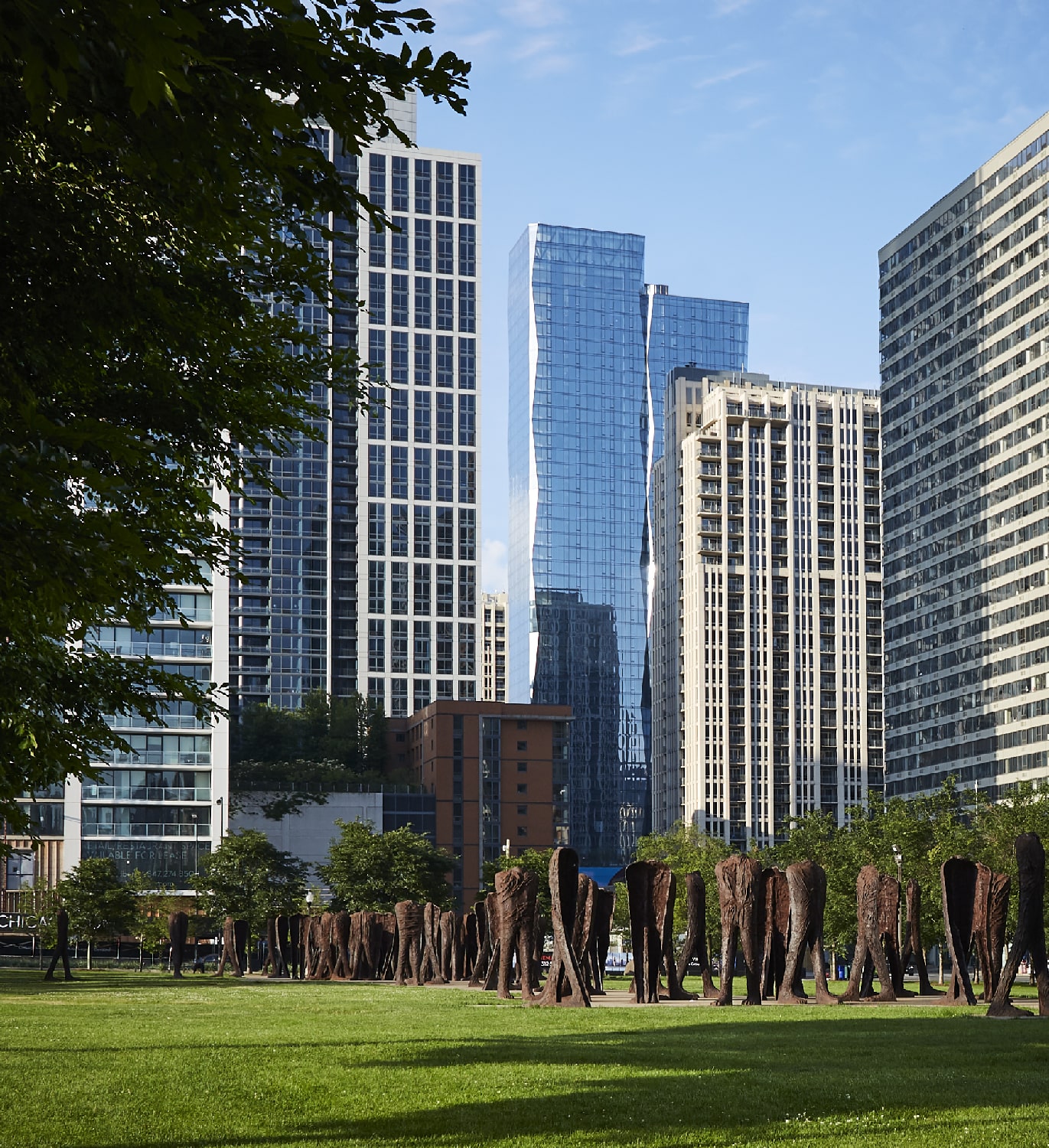 Grant Park is Chicago’s front yard. It’s where the city goes to play, to relax, to enjoy the fresh air and to escape form the concrete jungle. As Montgomery Ward once said, the space will be “forever open, clear, and free” for the people of the city to enjoy. At 312.98 acres, Grant park is a huge green space in the middle of the city and is easily walking distance from the Paragon. The park is full of things, and people, to see but here are a few of our favorite Grant Park attractions.

The Buckingham Fountain.
Every hour, on the hour, the fountain gives a spectacular show which sends 14,000 gallons of water into the air from 133 jets including one which launches water 150 feet in the air. At night, the show even includes lights. Even when the fountain isn’t sending columns of liquid as high as buildings, it is a great example of art-deco design and the seahorses which were carved from pink marble in 1927 are still a beautiful sight nearly a century later. Around the fountain are also beautiful statues set in their own ponds.

Petrillo Music Shell
If you prefer more melody than the show that the Buckingham Fountain offers, then you should head over to the music shell. The outdoor amphitheater hosts concerts for up to 35,000 people and hosts Jazz, Lollapalooza, blues, and other music festivals every year. The Shell is technically a semi-permanent structure so as not to violate building restrictions in the park, but it is nonetheless an integral part of the Chicago summer scene. Whatever your taste in music, there’s something for you to enjoy outside with your friends every summer here.

Museums and Galleries
Grant Park hosts the Museum Campus, and it would be easy to spend a whole week enjoying this section of the park on its own.

The Field Museum was founded to house anthropological and biological collections from the 1893 world’s fair. Today the 35,000 square foot museum hosts everything from dinosaur skeletons to sarcophaguses. Right when you walk in you’ll come face to foot with Máximo, a 122 foot long titanosaur. The display is a touchable cast, so you can reach out and touch one of the largest creatures ever to have walked the earth.

The Shedd Aquarium holds more animate animals, 32,000 of them in fact. You can see 1,500 different water dwelling species in the various ecosystems that the aquarium hosts, including the always popular Stingray Touch exhibition which lets guests touch rays as they swim around their 20,000 gallon tank. If you are looking for a cuteness overload, you can pay a little extra to meet and greet the aquariums penguins, which seems like a pretty wonderful choice for a date, child’s birthday, or just a treat for yourself after a long working week.

If Máximo wasn’t big enough for you, you can visit the Adler Planetarium to get an entirely different scale of experience. The Planetarium offer exhibits on the solar system, space exploration, telescopes, and the role of astronomy in culture. There are also lectures and talks throughout the year which should mean that even the keenest amateur science guru can leave the Adler in awe of the wonders of science and the solar system.

Millenium Park
In the northwest corner of Grant Park one can find Millennium Park. This area was renovated from 1998-2004 and today contains one of the area’s most iconic pieces of art. Properly called “Cloud Gate” but better known as “the Bean” this three story reflective sculpture reflects the city skyline as well as the amazed faces of visitors as they walk under its 12 foot high arch. It’s a very popular spot for photos, so be sure to get that shot if you need to capture that classic Grant Park Instagram moment.

Near the Bean is the Crown Fountain, another work of public art. This 50 foot fountain uses LEDs to display videos of Chicago residents who sometimes appear to spit water from their mouths. Despite the fact that it might seem odd, the waterpool below these faces is a popular place to escape the summer heat and get a welcome shower as the water spouts from the video wall.

When the fountain isn’t flowing in the winter months. The McCormick Tribune Plaza and Ice Rink is equally fun. The free public rink hosts over 100,000 skaters annually and is a great place to learn to skate or just grab a beer or award winning burger at the Park Grill while you watch novices tumble around the rink and more experienced skaters make the whole thing seem like it’s easier than walking. The Grill is the largest outdoor dining facility in the city and hosts live shows as well as exhibition.

Conclusion
This is just the tip of the iceberg as far as Grant park goes. The only real way to get to know the park is to get out there and explore. Set aside a weekend day, pack a snack, and see all the Grant Park has to offer!